Arnolt 218 was a prototype roadster displayed at the 1952 Turin Automobile Show.

If the prototype has survived, its location is not known. 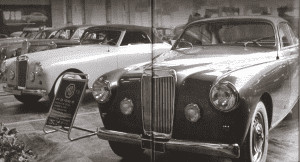 Note that this prototype car has a crease line that kicks up at the rear door edge, and prototype bumpers.

According to the delivery ledger, prototype convertible 218 was shipped on the SS Exton with prototype coupe 219, received in Chicago in July, 1952 (no exact delivery date given). The original customer was XXXX (sold on December 1, 1954). Illustrated on the cover of Motorsport Magazine, April, 1953. The prototypes are identified by the body crease that kicks up on the rear fender, while production cars kick up 2/3rds of the way on the door.